Founded in 2010 by Ryan Fraser

World of Black heroes is a website dedicated to following the portrayal of Black heroes; Black here is a term loosely being used to refer to the racial group of humans with dark skin color, to categorize a number of diverse populations into one common group. This list includes African American characters, characters of sub-Saharan African descent, Australian indigenous people, dark skinned Latinos or populations characterized by dark skin color (a definition that also includes certain populations in Oceania, Southeast Asia, southern South Asia, and the southern Middle East). World of Black Heroes will bring you everything on these characters in comics, movies, on TV, books and the people who bring them to ya!

After some terrible racist backlash towards the site we have also included Real Life Black Heroes, Beautiful Black Men and Beautiful Black Women sections to show that blacks are not just beautiful in the world of fiction.

We also strive to be the one stop spot for Interviews related to Black Superheroes, on black writers, artists and the biggest and best Black Superhero art and Cosplay Pictures Gallery.

Are you a black independent comic creator? or artist? or do you have a black character in need of some spotlight? contact us @ Worldofblackheroes@gmail.com.

IMPORTANT! DO NOT WRITE TO COMPLAIN THAT ANY OF THE CHARACTERS ARE NOT BLACK UNTIL AFTER YOU HAVE READ THEIR BIOGRAPHIES AND OUR BROAD DEFINITION OF BLACK, IT’S ANNOYING AND INFURIATING + LEAVE ALL THE RACISM AT THE DOOR THIS IS NOT THE PLACE FOR IT! 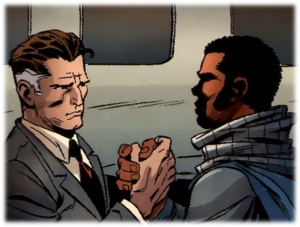 No Racism – Simply due Respect

Disclaimer: It’s come to my attention that some perceive this website as “racist” because we only showcase heroes of color. It is important to note WHY a website such as this one is important in the comics industry: first off all the big comic book websites out there such as IGN, Comicvine, CBR, Newsara shine the spotlight on characters such as Wolverine, Captain America, Batman and Superman 95% of the time. That means the thousands of black characters have a 5% chance for coverage on these websites and that’s when they are actually in the latest crossover or staring in their own ongoing series, which I might add is a very rare occurrence. This website is also valid for the purpose of giving the masses knowledge on the many other black superheroes outside of Static shock, Storm and Green Lantern/John Stewart; there are literally thousands of Black Superheroes out there but so few get the attention they deserve. As further proof of our equality stance I guarantee if you peruse anywhere on this website you will find not a single word espoused by me about the superiority of one race or gender over another. I firmly believe in the equality of races whether White, Arab, Black, Indian, Native American or Asian. All we do here on World of Black Heroes is shine light on the often neglected “black” characters of the comic book medium.